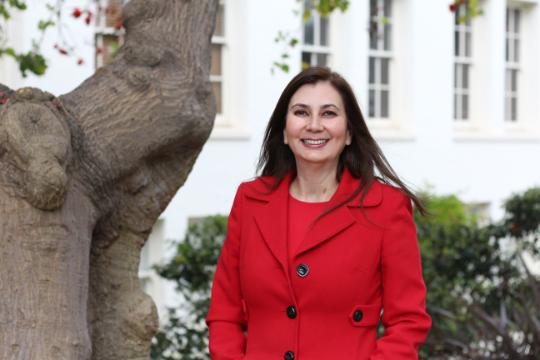 Gabriela de Anda recently celebrated her fifteenth anniversary as a part of the Loyola Marymount family. She spent several successful years working in the law school’s Center for Conflict Resolution, before becoming the Academic Records Coordinator in the Office of the Registrar for the Westchester campus. In June 2007, she transferred to Enrollment Management as the Administrative Coordinator to the Vice President, where she provides support to the Vice Provost, Director of Enrollment Research and Special Projects, Communications Manager.

Prior to Gabriela’s time at LMU, she spent eight years working for the Los Angeles City Fire Department (LAFD) as a Clerk Typist in the Quality Assurance Unit since its inception in 1990. She has a Bachelor of Arts degree in Spanish, which contributed to receiving numerous letters of commendation by LAFD’s Chief Engineer and General Manager for her participation in translating from English to Spanish Medical Priority Dispatch System for the LAFD dispatchers and for her participation in crafting and translating from English to Spanish a brochure for the LAFD’s community outreach program HART (Heart Attack and Rescue Training) targeted for high school students.